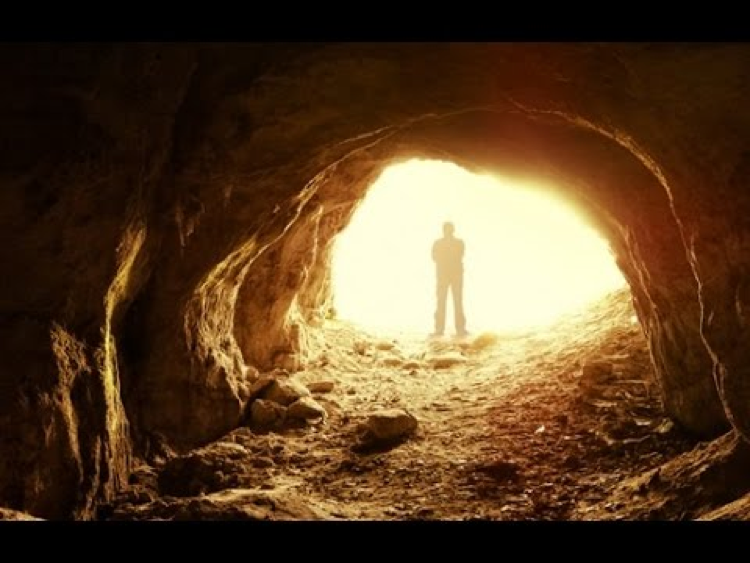 Recently, I was reminded of a concept I learned in one of my college Philosophy courses. The great Greek philosopher Plato, in his work The Republic, recounted a conversation Socrates had with his buddy, Glaucon, about how people can often be trapped in ideas that have shackled them from birth.

Plato’s allegory describes people in a cave, chained to each other from birth, and only able to stare in one direction at a wall. (It’s an allegory, not a real story, so rest assured, no one is being literally chained in a cave)

Before I go on, remember when you were little, and someone would shine a flashlight against a wall in a dark room. Then you could make figures with their hands and hold them in front of the flashlight to make shadows on the wall? I remember being able to make a duck and a wolf, but that was about it. Some friends could make really cool shapes, and I would always wonder what they were doing with their hands to make the shadows look so real.

Apparently Plato understood the idea of hand shadows even back in 400 B.C., but he came up with a really good analogy using shadows on a wall. You see, while these people, chained together, are staring at this wall, shadows pass across the wall made by a puppeteer that stands behind them marching puppets in front of a blazing, but controlled, fire. As the shadows pass, the puppeteer calls out, “duck,” or “wolf,” or “tree,” or “dog,” or, well, you get the point. So these people chained to the wall, “grow up” thinking the shadows on the wall are the real thing.

Socrates then states that the only way for one of the prisoners to be freed is for someone from outside the cave to enter in, unchain one of them, and bring them out of the cave into the light of the sun. Upon exiting the cave, the freed prisoner will have trouble adjusting to the light, much like we do when we exit a dark movie theater in the middle of the day. After adjusting, the guide then begins to show the prisoner the real “duck” or “wolf” or “tree” or “dog.” The prisoner might resist at first, unable to believe that these are the reality. But eventually, hopefully, the prisoner will become fully free, being able to see things for what they truly are. Sometimes that can be painful. “Ignorance is bliss” is over. You can’t un-know something once you know it. But knowing can also be powerful.

So Socrates had a good idea that works a lot with what I seek to do with my clients. Oftentimes they are stuck in patterns of belief about themselves, others, or the world, that keep them shackled to certain habits of thought or behavior. My goal during our sessions is to enter into that cave and help free them from these places where they are stuck.

As a coach, I walk with them outside their cave and stay with them, helping them to adjust to their light and then helping them to see reality. They find new purpose and new values, recognizing that their old purposes and values were unhelpful and in many cases harmful. So together we explore how to change the way they see their lives and understand their purpose. From there, they can begin to make lasting changes.

I have had to do that in my own life. My shadows included:

In life, some of the biggest downfalls we can have as humans is to either believe we aren’t in a cave (denial), not know we are in a cave (ignorance), or not realize there is actually a light and other life outside of the cave (unenlightened). The way to avoid these downfalls is to know the truth. Now, to understand the truth, one needs to know what the truth is. Truth is very simple. It is facts and opinions that we put together to create our reality based off of who we are as individuals. The challenge that most people face is understanding that two people in conflict both believe in the truth, just not each other’s. But at the end of the day, if our truth is allowing us to progress into the people we want to become with the results we want to have, all we need to do is understand that our truth is ours, and we can respect and acknowledge the truth of others.

Thanks to Plato’s ability to make me feel like a cave dweller, I decided to change what I accepted and what I acknowledged! The line between acceptance and acknowledgment is a thin one. But it is often this line that could keep us in the cave FOREVERRRRRR. As cool as that sounds….. I’d like to live above ground, in reality…not in a physical or metaphorical cave.

So what’s the difference and what would understanding the difference really do for us and our growth and self discovery? Well, according to Webster, acceptance is consenting to receive or undertake something offered and deeming it as adequate. Now that sounds cool and all, but let me put it in simple and modern terms that we can apply to this situation we are facing: Acceptance is looking at a fact or opinion and deciding that we will utilise that piece of information to dictate certain aspects of how we live and think. This can be beneficial or lethal depending on what we choose to accept as adequate to place in our reality.

Next, looking at acknowledgement, we can see that Webster is trying to fool us but I figured out his trick!!! Webster says that, “acknowledgement is the acceptance of the truth or existence of something.” The big word that creates the fine line aforementioned issssss….. EXISTENCE. The acknowledgment is what shows us something exists or is there, while the acceptance is the step we take afterwards when we decide whether what’s acknowledged is worth being accepted. Learning about how to sift between what to accept and what to acknowledge will help us all get out of that prison of a cave.

THANKS FOR READING AND HAPPY SIFTING!!

P.S. If you watched the Plato’s Cave video link, you’ll see that going out into the light is not the end of the allegory. Socrates poses the possibility of what happens when someone returns to the cave. More on that in my next post.

I can teach how to unconsciously create a system that will help you determine what to accept and what to acknowledge. Interested?